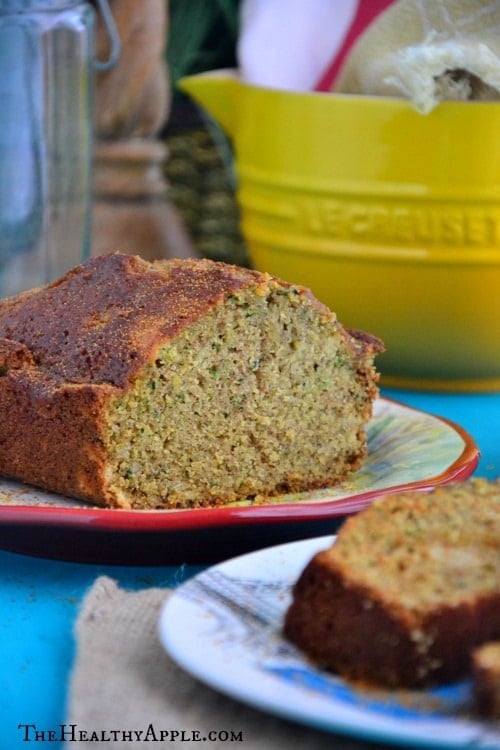 If you were looking for a healthy bread recipe that just happens to be Gluten-Free, Dairy-Free, Grain-Free, Soy-Free, AND Vegetarian, you’ve come to the right place! Combining flavors such as cinnamon and fresh lemon zest, this Cinnamon Paleo Zucchini Bread is a delicious and nutritious treat to serve for breakfast or dessert.

This Cinnamon Paleo Zucchini Bread recipe by Amie Valpone is a healthy bread alternative. She says, “I used creamy coconut oil and Himalayan sea salt for this recipe to make it extra flavorful and rich in nutrients. I’ve never tossed in cinnamon to a paleo zucchini bread recipe, but I thought I’d add a bit of natural sweetness for some extra flavor- just in case your zucchini’s aren’t in season or full of mega flavor. Prime time for zucchini is the summer but it’s such an easy veggie to find that it’s simply such a fun treat to make all year round.”

So grab some fresh zucchinis and get to baking! Enjoy!

Zucchini (/zuːˈkiːniː/) or courgette (/kʊərˈʒɛt/, British English) is a summer squash which can reach nearly a meter in length, but which is usually harvested at half that size or less. A fully grown courgette is referred to as a marrow.

Along with certain other squashes and pumpkins, it belongs to the species Cucurbita pepo. Zucchini can be dark or light green. A related hybrid, the golden zucchini, is a deep yellow or orange color.

In a culinary context, zucchini is treated as a vegetable; it is usually cooked and presented as a savory dish or accompaniment. Botanically, zucchini are fruit, a type of botanical berry, being the swollen ovary of the zucchini flower. Zucchini, like all squash, has its ancestry in the Americas. However, the varieties of squash typically called “zucchini” were developed in Italy, many generations after their introduction from the Americas.