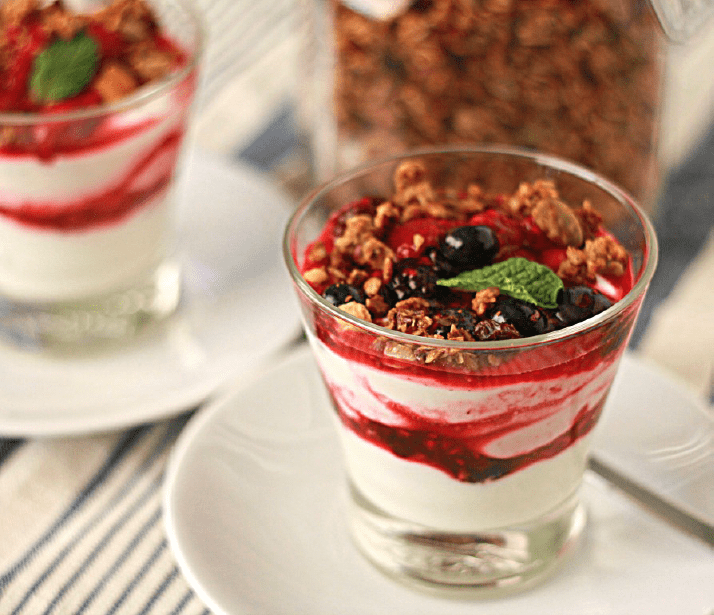 Get a delicious and healthy start to the day with this Yogurt-Berry Parfait with Olive Oil Granola recipe by Conner Middelmann-Whitney! He says,

I know what you’re thinking: “Olive oil in my breakfast cereal? Yuck!” Don’t knock it ‘til you’ve tried it, though. It’s crisp and crunchy, just like store-bought granola, but contains only a fraction of the sugar. Its high proportion of nuts lowers the granola’s glyce-mic impact but makes it quite high in calories, so don’t eat it like candy. Instead, sprinkle it, as here, over creamy yogurt and juicy berries, or any other stewed or pureed fruit as a sort of “fruit crisp” topping. Once you’ve made the granola, this delicious and nourish-ing breakfast (or dessert) takes just minutes to make.

Recipe is vegetarian and Gluten-Free.

Did you love this recipe? Don’t miss a single one!! Join today and get your FREE copy of Dr. Jill’s Paleolicious Snack Ideas!

n everyday language, a berry is a small, pulpy and often edible fruit. Berries are usually juicy, rounded, brightly colored, sweet or sour, and do not have a stone or pit, although many pips or seeds may be present. Common examples are strawberries,raspberries, blueberries; and red- and blackcurrants. In Britain soft fruit is a horticultural term for such fruits.

The scientific usage of the term berry differs from common usage. In scientific terminology, a berry is a fruit produced from the ovary of a single flower in which the outer layer of the ovary wall develops into an edible fleshy portion (botanically the pericarp). The definition includes many fruits that are not commonly known as berries, such as grapes, tomatoes, cucumbers, eggplants (aubergines) and bananas. Fruits excluded by the botanical definition include strawberries and raspberries. A plant bearing berries is said to be bacciferous or baccate.

Berries are eaten worldwide and often used in jams, preserves, cakes or pies. Some berries are commercially important. The berry industry varies from country to country as do types of berries cultivated or growing in the wild. Many berries such as raspberries and strawberries have been bred for thousands of years and are distinct from their wild counterparts, while some berries such as lingonberries and cloudberries grow almost exclusively in the wild.