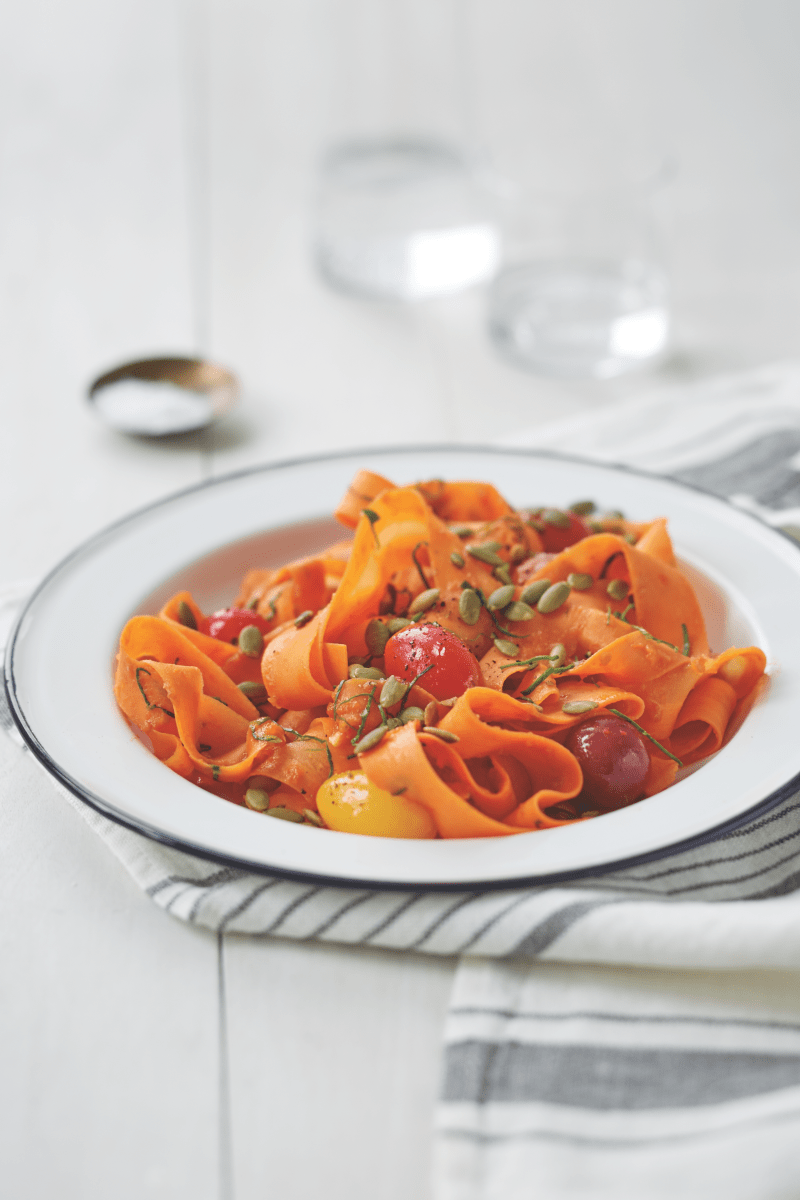 Coastal Carrot “Fettuccine” with Sun-Dried Tomatoes and Pumpkin Seeds from Amie Valpone at The Healthy Apple.

The “fettuccine” is actually made from carrots shredded into ribbons with a vegetable peeler. I think you’ll be surprised at how much it tastes like the real thing. The sauce clings to the ribbons, giving each bite a delectable, earthy flavor.*

Find a ton of delicious recipes like this in Amie Valpone’s brand new cookbook, Eating Clean: The 21-Day Plan to Detox, Fight Inflammation and Reset Your Body.

The wild ancestors of the carrot are likely to have come from Persia (regions of which are now Iran and Afghanistan), which remain the centre of diversity of Daucus carota, the wild carrot. A naturally occurring subspecies of the wild carrot, Daucus carota subsp. sativus, has been selectively bred over the centuries to reduce bitterness, increase sweetness and minimise the woody core. This has produced the familiar garden vegetable.

When they were first cultivated, carrots were grown for their aromatic leaves and seeds rather than their roots. Carrot seeds have been found in Switzerland and Southern Germany dating to 2000–3000 BC. Some close relatives of the carrot are still grown for their leaves and seeds, for example parsley, fennel, dill and cumin. The first mention of the root in classical sources is during the 1st century. The plant appears to have been introduced into Europe via Spain by the Moors in the 8th century, and in the 10th century, in such locations in West Asia, India and Europe, the roots were purple. The modern carrot originated in Afghanistan at about this time. The Jewish scholar Simeon Seth describes both red and yellow carrots in the 11th century. The 12th-century Arab Andalusian agriculturist, Ibn al-‘Awwam, also mentions roots of these colours; Cultivated carrots appeared in China in the 14th century, and in Japan in the 18th century. Orange-coloured carrots appeared in the Netherlands in the 17th century, which has been related to the fact that the Dutch flag at the time, the Prince’s Flag, included orange. These, the modern carrots, were intended by the antiquary John Aubrey (1626–1697) when he noted in his memoranda “Carrots were first sown at Beckington in Somersetshire. Some very old Man there [in 1668] did remember their first bringing hither.” European settlers introduced the carrot to Colonial America in the 17th century (source).

Leave a Reply to The Healthy Apple Cancel reply