The Tragedy of the World Trade Center Isn’t Over 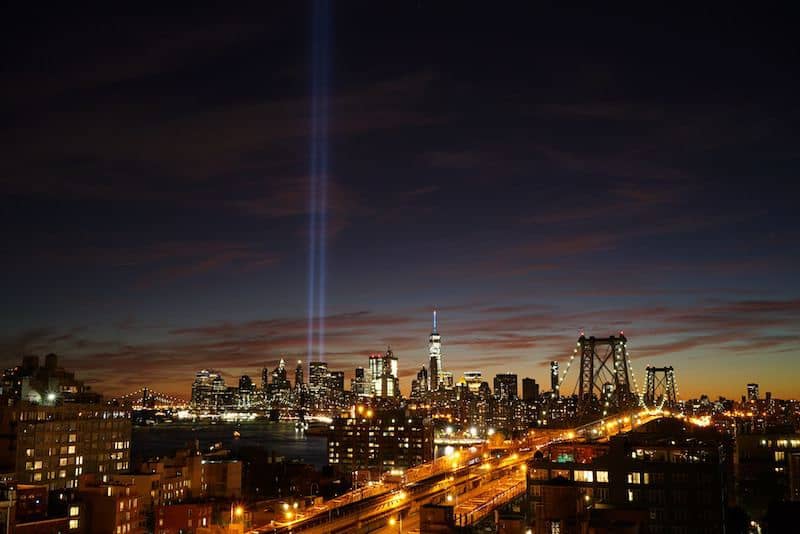 When the World Trade Center towers fell, carcinogenic substances were sprayed across an 8 mile radius. Asbestos, lead, beryllium, mercury, dioxins, volatile organic compounds (VOCs), and PCBs covered lower Manhattan. Over 17 years later, we are still seeing the effects of this terrible tragedy. People who live in the area covered by the dust and workers during and after the attack continue to report serious health impacts.

Keep in mind most reports include toxins that were monitored, but even those that were not monitored are equally of concern. Over 80 to 90% of the World Trade Center dust that settled was crushed concrete, gypsum, and SVF (Fiberous wool and glass) –  all of which are known to be irritants.

Dust samples collected by the EPA in the few weeks after the attack found 25% of all samples had at asbestos levels higher than the 1% significant risk threshold. These findings are in direct contrast to the reports made on September 13, 2001, where former governor of New Jersey Christie Whitman stated, “[The] EPA is greatly relieved to have learned that there appears to be no significant levels of asbestos dust in the air in New York City.” It seems they were too quick to make that conclusion. Only two years later the Inspector General of the EPA said that such a blanket statement should have never been made.

The health consequences following the collapse of the World Trade Center even caused a persistent cough in the firefighters and first responders, which was dubbed the “World Trade Center cough.”  But it wasn’t just those who responded immediately after the collapse that were affected. People who lived in the area and who returned in the weeks following the attack are still experiencing significant health effects.

Two Stories of Those Affected by the World Trade Center Dust

In an article by Business Insider on the 2018 anniversary of 9/11,  reporters told the story of Esther Regelson who lived two blocks south of the World Trade Center. A few months after the attacks, she noticed she was having a hard time breathing.

When she went to her doctor, she found out she had a lung capacity of 49% – a level that would have made getting through the day difficult. Over 15 years later, Esther still struggles with chronic bronchitis and acid reflux, and she’s not the only heartbreaking story.

Marcy Borders was the subject of an iconic 9/11 photograph where she was covered from head to toe in the WTC dust. She had started working at Bank of America only a month before and made it from the 81st floor down to ground level after the first plane hit.

She became known as “The Dust Lady” because of the photo and struggled to get back on her feet after 9/11. Afterward, she struggled with depression, overwhelming fear, drug, and alcohol addiction and died at the young age of 42 from stomach cancer.

Marcy’s heartbreaking story that ended in her untimely death is definitely not clear-cut – it would be difficult to blame the dust alone for her cancer. However, the ongoing reports of firefighters and paramedics struggling to get control of their health after 9/11 suggest that anyone who came in contact with this dust is of immediate concern.

What Needs to Be Done

Many reports have now concluded that the environmental risk assessment and management needed following the attacks was far too large for our governing agencies. This was an unprecedented event resulting in dust that was unique in particle size, chemical composition, and movement (due to physical disturbances, ie. living in a city, clean up processes etc.).

People living in lower Manhattan on and after 9/11 now exhibit more chronic disease.  Especially, a greater prevalence of respiratory and gastroesophageal illness. As one major report concluded:

“Much remains to be done to not only identify how exposures to WTC Dusts may have contributed to diseases/adverse health effects in those who were at/near Ground Zero, but to also devise methodologies to ascertain who is still healthy but at risk for developing exposure-related lung, cardiovascular, and other pathologies.”

There are several programs set up to keep track of the health problems of those directly affected by the World Trade Center attacks. The 9/11 Health Watch is a federally funded program for those injured and who have become ill due to the exposure of toxins at Ground Zero. This support program also covers those who are psychologically affected.

Remembering Those Left Behind by Disasters

9/11 isn’t the only disaster that carried massive health consequences. Other disasters like hurricanes, flooding, oil spills, algae blooms, and beyond, leave a wake of destruction behind them often lasting for years.

When a disaster strikes, attention is usually placed on the immediate effects. But what happens in the following decades can sometimes affect more people indirectly than the initial event. It’s hard to know how many are affected in the decades after a disaster because it’s very difficult to identify the root cause of chronic diseases like cancer.

In the case of 9/11, it’s hard to imagine anything could be worse than that day. But without adequate awareness and risk management, I worry that people are continuing to be harmed and are not receiving proper care. Knowing your toxin exposure and taking the appropriate steps to support detoxification and reduce your overall burden can give your body a fighting chance. But knowing the impact on your body is a big part of that process.

Share this article to help spread awareness of the World Trade Center dust disaster. This is one of the more difficult subjects have written about, but it’s important to spread quality information so people can get the help they need.