Could Thyroid Dysfunction be Causing Your Symptoms? 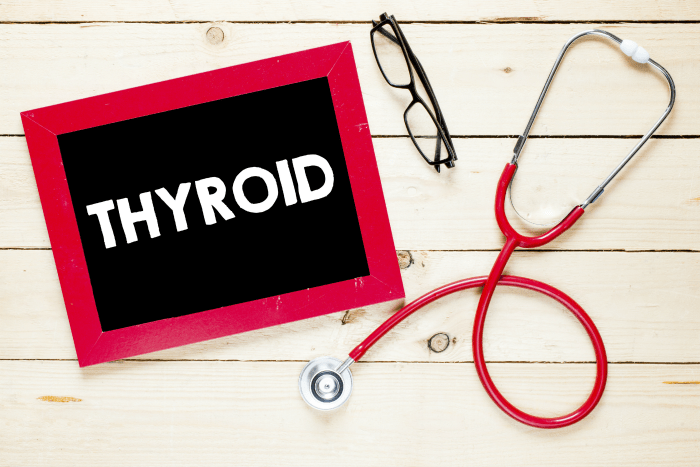 Millions of Americans suffer from fatigue, weight gain, depression, and cognitive impairment. Many believe that they have no choice but to accept these seemingly “age-related” declines in quality of life.

Underactive thyroid (hypothyroidism) is often overlooked or misdiagnosed and can be the underlying cause of these symptoms. Patients and their doctors often disregard these common signs of thyroid hormone deficiency, mistaking them for normal aging.

Role of the Thyroid

The thyroid is a butterfly-shaped organ located just below the Adam’s apple in the neck. Made up of small sacs, this gland is filled with an iodine-rich protein called thyroglobulin along with the thyroid hormones thyroxine (T4) and small amounts of triiodothyronine (T3).   The primary function of these two hormones is to regulate metabolism by controlling the rate at which the body converts oxygen and calories to energy. In fact, the metabolic rate of every cell in the body is regulated by thyroid hormones, primarily T3.   In healthy individuals the gland is imperceptible to the touch. A visibly enlarged thyroid gland is referred to as a goiter. Historically, goiter was most frequently caused by a lack of dietary iodine. 8 However, in countries where salt is iodized, goiter of iodine deficiency is rare.

Hypothyroidism is a condition in which the thyroid gland does not make enough thyroid hormones, characterized by a reduction in metabolic rate. The main symptoms of hypothyroidism are fatigue, weakness, increased sensitivity to cold, constipation, unexplained weight gain, dry skin, hair loss or coarse dry hair, muscle cramps and depression. However, most symptoms take years to develop. The slower the metabolism gets, the more obvious the signs and symptoms will become. If hypothyroidism goes untreated, the signs and symptoms could become severe, such as a swollen thyroid gland (goiter), slow thought processes, or dementia.
There is evidence that the standard blood TSH test reference range may cause many cases of hypothyroidism to be missed. Most physicians accept a reference range for TSH between 0.45 and 4.5 mU/L to indicate normal thyroid function. In reality, though, a TSH reading of more than 2.0 may indicate lower-than-optimal thyroid hormone levels.
According to a study reported in Lancet, various TSH levels that fall within normal range are associated with adverse health outcomes.26

There is another and separate problem brought on by these overly broad normal ranges for TSH. People already diagnosed and being treated for hypothyroidism are often not taking correct doses of thyroid replacement hormone. A November 2010 study reported that about 37% of people being treated for hypothyroidism were taking incorrect doses, about half too much and another half too little hormone.

Gastrointestinal problems: Hypothyroidism is a common cause of constipation. Constipation in hypothyroidism may result from diminished motility of the intestines. In some cases, this can lead to intestinal obstruction or abnormal enlargement of the colon.36 Hypothyroidism is also associated with decreased motility in the esophagus, which causes difficulty swallowing, heartburn, indigestion, nausea, or vomiting. Abdominal discomfort, flatulence, and bloating occur in those with small intestinal bacterial growth secondary to poor digestion.31
Depression and psychiatric disorders: Panic disorders, depression, and changes in cognition are frequently associated with thyroid disorders.37 Hypothyroidism is often misdiagnosed as depression.38 A study published in 2002 suggests that that thyroid function is especially important for bipolar patients: “Our results suggest that nearly three-quarters of patients with bipolar disorder have a thyroid profile that may be suboptimal for antidepressant response.” 39
Cognitive decline: Patients with low thyroid function can suffer from slowed thinking, delayed processing of information, difficulty recalling names, etc.40 Patients with subclinical hypothyroidism show signs of decreased working memory,41 and decreased speed of sensory and cognitive processing.42 An evaluation of thyroid hormones along with TSH may help avoid misdiagnosis as being depressed. 43
Cardiovascular Disease: Hypothyroidism and subclinical hypothyroidism are associated with increased levels of blood cholesterol, increased blood pressure, and increased risk of cardiovascular disease. 44 Even those with subclinical hypothyroidism were almost 3.4 times as likely to develop cardiovascular disease than those with healthy thyroid function.

Metabolic Syndrome: In a study of more than 1,500 subjects, researchers found that those with metabolic syndrome had statistically significantly higher TSH levels (meaning lower thyroid hormone output) than healthy control subjects. Subclinical hypothyroidism was also correlated with elevated triglyceride levels and increased blood pressure. Slight increases in TSH may put people at higher risk for metabolic syndrome.
Reproductive system problems: In women, hypothyroidism is associated with menstrual irregularities and infertility. Proper treatment can restore a normal menstrual cycle and improve fertility.
Fatigue and weakness: The well known and common symptoms of hypothyroidism, such as chilliness, weight gain, paresthesia (tingling or crawling sensation in the skin) and cramps are often absent in elderly patients compared with younger patients, fatigue and weakness are common in hypothyroid patients.

Hypothyroidism: What you need to know

Conventional treatment almost always begins with synthetic T4 (levothyroxine) preparations like Synthroid® or Levoyxl®. Low doses are usually used at first because a rapid increase in thyroid hormone may result in cardiac damage.
Desiccated Thyroid: Armour thyroid , Nature-throid, and Westhroid are prescription medications that contain desiccated porcine thyroid gland. Natural thyroid extracts have been used since 1892 and were approved by the Food and Drug Administration in 1939. Armour thyroid and most other natural glandular preparations are made to standards approved by the United States Pharmacopoeia.
Armour thyroid is preferred by some clinicians because it may achieve results in patients that fail to respond to levothyroxine alone. Patients with hypothyroidism show greater improvements in mood and brain function if they receive treatment with Armour thyroid rather than Synthroid®.96 One argument favoring natural hormones is that other naturally occurring hormones and chemicals found in these preparations may buffer or enhance the effect of the active hormones.

If you have concerns about your thyroid function, call today to schedule an appointment with Dr Carnahan for an complete evaluation and treatment of thyroid dysfunction.

Is the Vagus Nerve the Secret to Beating Chronic Fatigue?
March 3, 2020

Love Heals: The Powerful Effects of Love ( and How To Create More of It)
February 11, 2020

Can This Powerful Hormone be the Key to Treating Type 2 Diabetes & More?
September 11, 2019

Yes, Your Hormones Can Mess with Your Mood. Here’s How to Fix That
February 10, 2019