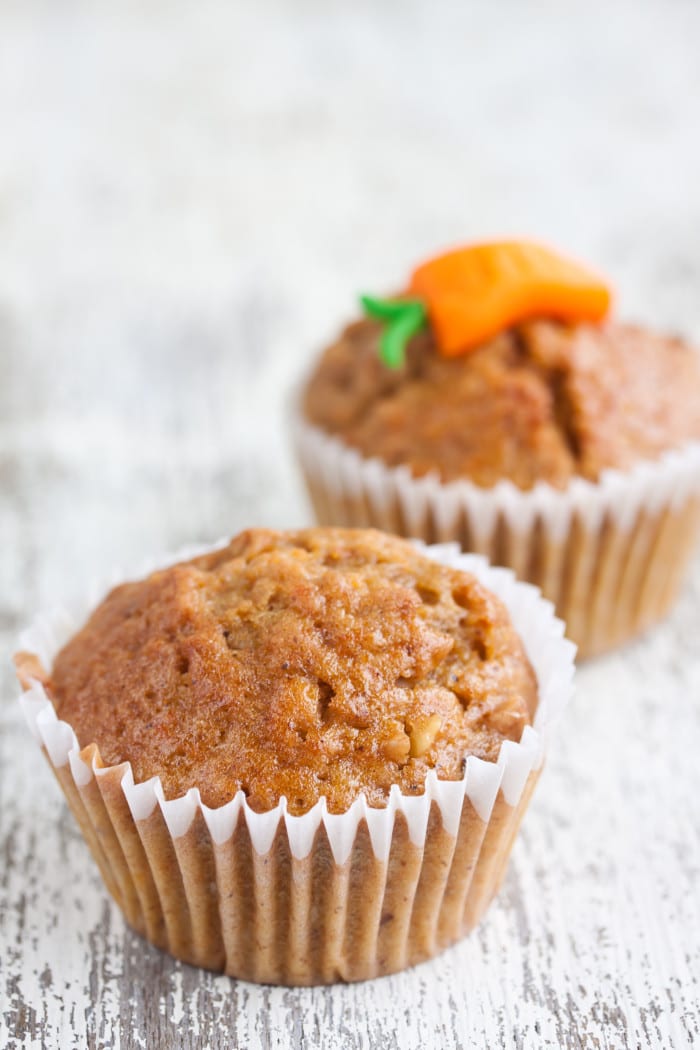 This delicious Paleo Carrot Cake with Vanilla Icing recipe was kindly shared by Brandi Mackenzie! Check out more of Brandi’s nutritious and gut-healing recipes on her website!

I love carrot cake, but had never actually made a carrot cake that I could recall. So, last week when I was invited to a surprise party and I was informed that the birthday girl had really been craving carrot cake, I was up for the challenge!

I went to the farmers market and gathered fresh carrots, I made my own flour and I cooked them into cute little mini cakes (as seen above). I was totally that girl,but all aspects of bringing it together were so enjoyable for me.

I love to bake and I may be a chef, but I am not a trained pastry chef. I am not a chemist by any means, and that’s what a true baker or pastry chef really has to be. So, I looked up a cake from Jenni Hulet’s book, My Paleo Patisserie for inspiration and used some of her formulas to create my recipe.

I tend to digest cashews better than other nuts, so that is my choice for a flour. You can also use store-bought almond flour or even hazelnut flour, but the taste will be slightly different. Almonds are pretty neutral and sweet and hazelnuts will leave a different flavor combination. Be sure not to substitute with cassava or coconut flour, as the texture will be totally off! Nuts and seeds have oils and are not absorbent, whereas cassava and coconut are fine and very absorbent. I am not certain, but tigernut flour could work here, for autoimmune protocol compliance, however this recipe cannot be made without eggs. Using an egg substitute will distinctly change the texture that makes this cake so nice.

I also made some of this batter into muffins, which were delicious! Do what is easiest and most suits your home, event or family.

Let me know what you think!
xo, B

The History of Carrot Cake

Carrots have been used in sweet cakes since the medieval period, during which time sweeteners were scarce and expensive, while carrots, which contain more sugar than any other vegetable besides the sugar beet, were much easier to come by and were used to make sweet desserts. The origins of carrot cake are disputed. Recipes for carrot cake occur as early as 1827. The oldest known recipe of carrot cake dates from 1892, in a book of the housekeeping school of Kaiseraugst (Canton of Aargau, Switzerland). According to the Culinary Heritage of Switzerland, it is one of the most popular cakes in Switzerland, especially for the birthdays of children.

The popularity of carrot cake was probably revived in Great Britain because of rationing during the Second World War. Carrot cakes first became commonly available in restaurants and cafeterias in the United States in the early 1960s. They were at first a novelty item, but people liked them so much that carrot cake became standard dessert fare. In 2005, the American-based television channel Food Network listed carrot cake, with its cream-cheese icing, as number five of the top five fad foods of the 1970s.

Another story indicates that following the Second World War there was a glut of canned carrots in the United States. A business man named George C. Page hired master bakers to find uses for the cans of carrots. He somehow promoted the idea of carrot cake to help create a demand for the product. (source)

Here is a delicious Paleo-version for your enjoyment…..Paleo Carrot Cake with Vanilla Icing!